Following our announcement last year that my wife and I would be covering college tuition for the kindergarten class of Rio Vista Elementary School, we were truly overwhelmed by the amount of love and support that poured in from people around the world.

We were inundated with kind notes from folks who were moved by our gesture, and we were elated to hear that many people were inspired enough by our story to commit their own acts of kindness and generosity.

It wasn’t until very recently that it was brought to my attention that a story like ours had been featured in popular media recently. In fact, it turns out that season 6; Episode 12 of NBC’s hit sitcom “The Office”, chronicles the lead character Michael Scott making a similar pledge; and then subsequently not being able to deliver on his promise when it came time for those kids to graduate high school.

Recently I was approached by a younger colleague who asked me “are you aware that you’re a meme now?”

Naturally, my initial reaction was “…what’s a meme?”

After a brief but thorough explanation of the finer points of internet culture, he showed me this Facebook post:

I couldn’t help but laugh at the comparison. But let me assure you that in the case of Rio Vista Elementary School, this will not be an occasion where life imitates art. My wife and I look forward to fulfilling our pledge and continuing to watch this group of special young people grow in their education.

Now that this has been cleared up, I’ll leave you with one of my favorite quotes. 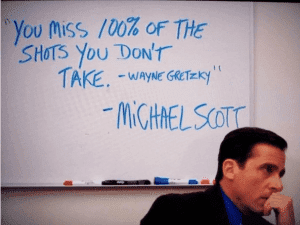