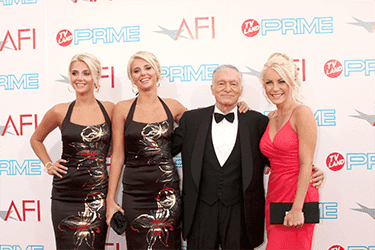 With the passing of 91 year old Playboy founder Hugh Hefner, many are wondering what will become of the millionaire’s estate. The situation is complicated, and many details have not yet been entered into the public record. However, we do know what will happen to some of his most iconic holdings.

Hefner was worth an estimated $50 million at the time of his death, though various sources disagree on the exact figure. He owned 35 percent of the Playboy brand and 100 percent of the associated magazine, generating a monthly income of around $300,000. Hefner was once worth over $200 million, but the declining fortunes of the magazine have hurt his bottom line in more recent years.

He also had stocks and bonds valued at around $36 million and a joint bank account with an “unnamed” person containing $6 million in assets. His current wife, 31-year old Crystal Hefner, will not inherit any of this wealth due to the terms of a prenuptial agreement she signed before her wedding. That agreement awards her $5 million and a nearly 6,000 square foot property Hefner bought for her in April of 2013. That property, including a contemporary villa overlooking the Sunset Strip, is expected to become her primary residence.

The rest of Hefner’s fortune is to be distributed to his four children, the film school at the University of Southern California, and a host of different charities. Two of his children work or have worked for Playboy Enterprises, as Christie Hefner served as the company’s CEO for 20 years while Cooper Hefner is its current Chief Operating Officer. David Hefner avoids the public eye, and Marston Hefner describes himself as a writer and gamer. The exact terms of Hefner’s will are not known at this time.

Contrary to popular belief, the famous Playboy Mansion was not owned by Hefner and has not been for a very long time. The deed to the property was transferred to Playboy Enterprises years ago. The company sold it to Daren Metropoulos, son of billionaire C. Dean Metropoulos and a businessman in his own right, for $100 million in August of 2016. As a condition of the sale, Hefner was allowed to stay there for $1 million in rent annually until his death. The property will now be available for Mr. Metropoulos to use as he sees fit. He reportedly intends to combine the estate with the 2.28 acre property he purchased from Hefner’s second wife, Kimberly Conrad, for $18 million in 2009. The two properties are adjoining, so combining them will be easier than it initially seems.

The Playboy Mansion and associated estate are worth more than Hefner was. The property’s primary dwelling is a 15,000 square foot Gothic Tudor mansion designed by famous architect Arthur Kelly in the mid 1920s. It also includes the lagoon-style pool with a cave-like grotto that became synonymous with the Playboy brand and Hefner himself. In addition, the estate includes a four bedroom guesthouse, Games House, commercial kitchen, outdoor kitchen, a tennis court, and expansive greenery including gardens and large lawns. It also includes an aviary and a display area for exotic animals, as it is one of the few private residences in Los Angeles County to have a legal zoo license. Mr. Metropoulos is expected to make extensive renovations to the property to better suit it to his needs.

The distribution of Hugh Hefner’s estate remains interesting even without the iconic Playboy Mansion. Millions of dollars are at stake, and it is likely that further details will become available with time. We’ve seen a number of cases where high profile celebrities don’t take the time to make a proper estate plan, and then their loved ones are left to pick up the pieces, and sometimes fight over what is left. Our estate planning attorneys were pleased to hear that Mr. Hefner’s estate was in order upon his passing, and we send our condolences to his children.