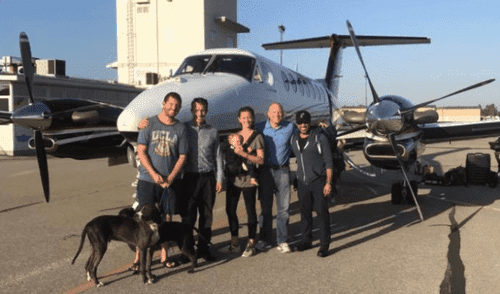 Following the destruction of Hurricane Irma, our very own Marty Burbank embarked on a rescue mission to Puerto Rico where he would be picking up evacuees, while also dropping off crucial supplies. In the following Q&A, Marty walks us through his journey to Puerto Rico.

Q: PLEASE EXPLAIN THE OBJECTIVE FOR YOUR RECENT TRIP TO PUERTO RICO.

Marty Burbank: I was speaking to a group of Residential Care Facility for the Elderly (RCFE) owners about conservatorships and how to avoid them. At the beginning of the meeting a woman introduced herself to me and she knew that I “help people.” She told me that her 10 month old granddaughter was in Puerto Rico and since hurricane Irma hit she had not been in communications with her son or daughter in law and was very worried about all three of them. She asked if I could help. I said I did not know how but we would do all we can to help. Initially, I thought of using my own plane but it was really too small and would have to take way to many stops for fuel. I put the information my pilot friends on Facebook and a few options came up, but because of the communications issue we were not able to communicate with Tyler when they would be able to meet a plane. Eventually, the worried grandmother was able to communicate but by then the planes we had lined up had already left. Then, out of the blue, my friend John C. Manly, Esq. asked if I wanted to use his King Air 350 to go get people out of Puerto Rico. He did not even know I had been working on this. So I told him I had a family in mind and loaned me his plane and pilot.

WERE THERE ANY OBSTACLES THAT STOOD IN THE WAY OF YOU BEING ABLE TO CARRY OUT YOUR MISSION?

Marty Burbank: It was a long trip so we needed a plane that had the range and the ability to carry a lot of weight, there was lots of thunderstorms so we also needed a plane that could fly high over most of the weather, and one with weather radar to we could pick our way through the storms we could not fly over. We had problems with communication. We could not communicate in the air and so every time we landed we would communicate with AeroBridge and the plans kept changing. Our expected mission of delivering needed generator supplies to St. Thomas was canceled because of a miscommunication about Trump’s visit and it was believed we would not be able to land in PR. But we were not affected by that so we ended up flying about 150 miles the wrong direction to pick up another load of supplies and by then we had to go direct to PR because otherwise it would be dark and there was no electricity to light the runway. When we left Florida we were to pick up our original three, there two dogs, a gentleman with dementia and his wife, a woman about to give birth and two doctors.

WHAT CONDITION WAS PUERTO RICO IN UPON YOUR ARRIVAL?

Marty Burbank: It was worse than I thought. It was amazing to see the destruction, but what was worse was the stories of the people trying to cope with the destruction. We spoke to people who were drinking water from puddles, and even though they tried to “filter it” it was still full of mosquito larvae. We spoke to people who had to assist neighbors who had lost loved ones dig holes to bury them in their own back yard because there was no infrastructure to deal with the bodies.

HOW CAN WE HELP TO SUPPORT THE PEOPLE YOU RESCUED?

Marty Burbank: They are all back in the states with family but if people want to help now, they can support Giving Children Hope, givingchildrenhope.org or AeroBridge.org. Giving Children Hope helped to provide much of the supplies as well as several people who just heard about the trip and brought supplies to the airport or to my house. AeroBridge helped coordinate the pickup of additional supplies and evacuation of additional people once we got to PR.