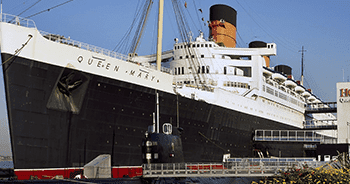 One of Long Beach’s most recognizable landmarks, The Queen Mary, has received a massive face lift. The iconic vessel has recently been transformed into a sprawling, 65-acre resort and entertainment destination. The former cruise ship is one of the most sought after attractions in Long Beach, and features new attractions like ice climbing walls, world class shopping, five star dining and live entertainment.

If you have ever wanted to try a cruise without committing to a week at sea, the Queen Mary is just the ticket. Not long ago, this huge cruise ship, which ceased sailing decades ago, was in danger of sinking if it did not receive the proper restoration that it needed. Now, a new developer has come in and assumed a lease on the property, commencing repairs and making it a world class destination for tourists and locals alike.

Taylor Woods, principal of Urban Commons said that Queen Mary Island would provide an entertainment destination for the whole family. With a boardwalk, outdoor concert area and more than 200 hotel rooms, the complex is like a city unto itself. The design team has upgraded the ship and its plaza with contemporary features, while retaining its historical details that hearken back to its sailing heyday in the 1940s.

Visitors can now book their space on the iconic vessel and make reservations for dining and shows. Both the developers and Long Beach mayor Robert Garcia hope that the Queen Mary Island resort will bring much needed revenue to the city.

The Queen Mary is central to downtown, just steps from aquariums, museums, tours and cruise ship ports. The island is great for both adventure and relaxation. With a trampoline park, zip line, climbing wall and spa, there is definitely something for everyone right in the heart of Long Beach.