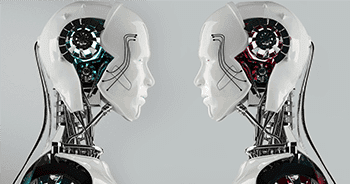 Artificial intelligence and the elderly may seem like an unlikely pair, but tech companies are seeing a potential for AI services with seniors as the primary target market. Tech and robotics companies and even the auto industry are looking into how robots can enhance the quality of life for senior citizens, especially those who live alone and at risk for isolation, loneliness and depression. Among these companies is Israeli-based tech company Intuition Robotics which recently raised 14 million for the development of ElliQ, a social companion robot. One of their investors is Toyota, which, along with IBM, is among the largest companies investing in AI and robotics for the benefit of older users.

The idea first came to Intuition Robotics CEO Dor Skuler who noticed that his kids were more likely to send their selfies to Grandma and preferred this method of interaction than talking on the phone. In an interview with CNN Money, the CEO concluded that ElliQ will allow kids like his to have more interactions with their grandparents, and vice versa.

Aside from enhancing communication, the program is designed to assist caregivers by giving reminders for medications, doctors’ appointments, and activity schedules. The program can even give out personalized suggestions for activity to help keep seniors engaged and keep boredom at bay.

While all of these look attractive on paper, our estate planning attorneys in Corona can tell you firsthand that the elderly are generally averse to using technology of any kind around the home. To solve this problem Intuition’s research team has looked into form factors that seniors are more comfortable with. Their studies have shown that robots that look like humans might seem a bit strange for elder users, and so they have opted to design robots that do not look like humans. These robots will also be programmed to perform specific tasks, very similar to common household appliances like a refrigerator or the dishwasher. For example, ElliQ is designed to sit on a desk and it’s primary function is to facilitate communication and give reminders. It also allows quick and easy sending of texts and photos. This is in line with similar approaches done by other companies like Blue Frog Robotics which designed their robots to look like robots from pop culture such as Wall-E and Star Wars.

However, while humanoid-robots are not the best choice for elderly companions, Hasbro has stumbled on a promising strategy that involves realistic robotic pets after it noticed a surge in positive reviews for FurReal toys, robotic toys initially designed for ages 4-8. They found out that more people are buying these toys for elderly loved ones, primarily because they provided interactive companionship. These toys also required little maintenance unlike real pets, and can be used by seniors living in homes and communities that did not allow pets. Hasbro released their Joy for All Companion Pets, a cat and a Retriever in 2015 and 2016. Both pets are designed without connectivity options to the Internet and do not have screens, but instead are made to look and feel like real pets.

Outside robotics, other companies are looking into AI that can control smart environments for seniors. IBM researchers are currently doing a project that involves tracking different factors of an elderly person’s daily activities and habits to create a better understanding of a senior individual’s environment.

Artificial intelligence and robotics can offer significant improvements in the quality of life and the delivery of health services to seniors. However, for aging potential users to take full advantage of these improvements, researchers must first learn how to win this target demographic over.

As part of our work as estate planning attorneys, we feel a responsibility to keep the public informed on issues that directly relate to senior citizens and the elderly. If there’s a topic you would like us to feature in our weekly blog posts; please contact us today!