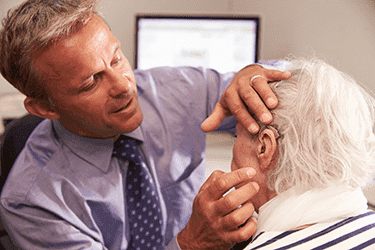 You certainly don’t need an estate planning attorney to tell you that life has many ups that are uncomfortably paired with many downs. It is hard to come face to face with some of the major issues that affect Americans such as hearing loss. This issue now affects about 48 million Americans, which is quite troubling. What is worse is that hearing loss seems to increase the chances of a person developing other serious maladies; such as dementia.

There are times when it seems like everything is against you, and this link definitely feels like one of those moments. It feels unfair to suffer from hearing loss only to turn around and deal with dementia as well. It should be noted that seniors consider dementia to be one of the more fearsome afflictions they could ever have; a survey pointed out that it is scarier to them than cancer.

Studies found the link between dementia and hearing loss, which has caused much concern, but it also tells specialists that treating hearing could prevent dementia in the future. It tells younger people to do their best to protect their hearing in order to avoid dementia or other cognitive issues in the future.
Researchers have not really found the reason this link exists though several experiments show the connection. Some do have a couple of theories. For example, hearing loss does mean that the brain will absorb less information. This could drastically cut the amount of stimulation the brain receives per day, which may have something to do with this connection. In essence, the theory is saying that the brain is like a muscle that needs flexing or it loses some of its power. Some researchers have also made similar connections to other human senses such as vision, which also seems to have a similar link to dementia.

Another possible explanation for this link may have to do with stressing the brain too much. A person with hearing loss has to force himself or herself to hear. This can create what some call a cognitive load. The brain cannot take the stress, which could end up hurting it in the long run, increasing the risk of dementia for seniors.

Of course, some say it has to do with people isolating themselves from others when they have a hard time hearing. People do not want to be with other people if hearing becomes such a big problem. It makes sense to want to isolate yourself in order to avoid the stress, but this could be a problem. Other studies show that social isolation can lead to cognitive decline.

Now, some of these theories suggest that the risk could be reversed or at least halted by simply dealing with hearing loss. Those already suffering from hearing loss may want to consider more precise hearing aids. These hearing aids may help revitalize the brain cells that have gone dormant or have shrunk due to hearing loss. A person who is dealing with hearing loss may have to do his or her best to try to talk to others more often, even if it is frustrating. This is going to take patience, but it may be worth it if it means the risk of dementia is reduced. Keep in mind that these solutions are merely based on the theories known so far, but it is important to keep up with the research to see if more concrete information is revealed regarding this link.

As estate planning attorneys we do our best to keep the public informed about issues relating to the seniors in our community. If you have a topic you would like us to cover, please contact us.