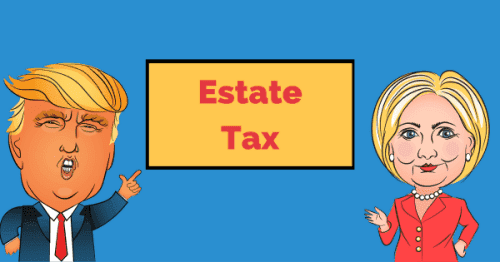 On the issue of estate tax plans in this election year, the views that both candidates hold could not be more opposite. Donald Trump wants to completely repeal the estate tax, while Hillary Clinton is in favor of hiking the estate tax up to an astonishing 65%; a move which many have argued aims to resonate with supporters of Senator Bernie Sanders.

The current laws, which were finalized in 2013, require estates worth more than $5.45 million per person or $10.9 million for a married couple to pay 40% in taxes, while anything less is considered exempt.

Secretary Clinton has previously agreed with The Sensible Estate Tax Act of 2016, which would shave the estate tax minimum from $5.45 million down to $3.5 million while adding a 5% increase on the current tax rate of 40%. The Joint Committee on Taxation estimates that the proposal would raise $161 billion over the next ten years. However, Mrs. Clinton now wants to apply a 50% tax rate to estates worth over $10 million per person, 55% for estates exceeding $50 million, and 65% for estates beyond $500 million.

As one might expect, many estate planning attorneys have said that these enormous estates have the means to find ways around many of the rules in order to reduce the impact of tax liabilities on their estates. However, with the new stricter administrative guidelines that make discounts rarer and worth less than before, that may not always be the case.

Avoiding the estate tax requires an in-depth process of pre-planning with an experienced estate planning attorney, and can be rather expensive to do correctly. Consequently, some people argue that Mrs. Clinton’s proposed estate tax hikes may be a bitter pill to swallow for some Americans after already paying income taxes for decades.

Further, not long ago President Obama proposed to completely eliminate basis step-up, arguing that allowing it for income tax purposes on death was a huge loophole in the tax code. Essentially, a “stepped-up basis” on inherited assets means that the value of an asset “steps up” to the current value when inherited, no matter what the original buyer paid for it. Under current law, no capital gains tax is due on the increase in the value of an asset from the time it was purchased until when it was passed on to an heir.

In combination with individual state estate taxes, the President’s proposal could yield some of the highest estate tax rates in the world, but would primarily affect households with very high incomes and could also generate billions of dollars in revenue. However, many Republican members of Congress argue that small business owners could be particularly affected since it’s difficult for many family businesses to stay afloat after the death of a key figure. Of course, these circumstances are quite varied.

It remains to be seen whether Secretary Clinton’s 50% to 65% estate tax rate proposals or Trump’s repeal of the estate tax helps either of them to secure more votes. Regardless, proponents of the estate tax argue that it helps to stop the rich from getting richer, but opponents claim that since income taxes must be paid on earnings that eventually make up the estate’s value it takes too much away from hard-working Americans.