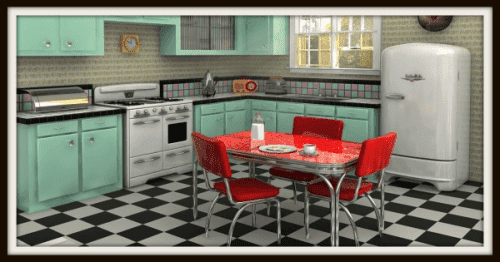 A living history museum in Aarhus, Denmark has conjured up an incredible exhibit that stands out from the usual blacksmith shops. Tucked away in one corner of Den Gamle By (The Old Town) Museum is an entire apartment transported straight out of the 1950’s, affectionately referred to as the “House of Memories.”

This exhibit is not usually open to the public, and further is not aimed at the typical audience of children that were sent to the museum to learn about generations that came before them. Instead, the House of Memories is intended for visitors living with Alzheimer’s and other forms of dementia.

Residents from local nursing homes and other Alzheimer’s patients are greeted at the front door by a young woman in 1950’s apparel, who welcomes them inside while staying in character of a mid-century housewife. The hostess leads guests around the small apartment while pointing out and using vintage items, and encourages her audience’s participation. The museum interpreter, aka hostess, asks the guests open ended questions for more information on the items, as if she were a student in a classroom and all the museum visitors were her teachers.

Curator Tove Engelhardt Mathiassen furnished this apartment exhibit with unbelievable attention to detail. Everything in it is authentic 1950’s, whether it’s the coffee in the pantry, the furniture in the dining room, or even the electrical outlets. She even referenced home décor magazines to ensure paintings were hung at the proper height and era-appropriate houseplants were featured. As she says, “It’s a totality of sights and touch and smell which, in our experience, brings out their own memories.”

Dorthe Bentsen, who holds a doctorate in psychology and heads the Center on Autobiographical Memory Research at Aarhus University, agrees that there’s definitely science at play here. She says that for Alzheimer’s patients, memories from their teens and 20s – a period known as the “reminiscence bump”—are the best preserved. Although researchers don’t know exactly why this is the case, they also say it’s a fact that this “bump” exists. For many of the visitors, that period happens to fall in the 1950s.

Henning Lindberg, the man who came up with the House of Memories idea, says he’s witnessed dramatic transformations in the visitors as they explore, such as people talking for the first time in years or even forgetting to use their canes! Word about the effects of the exhibit on Alzheimer’s patients is spreading, and in fact there are already several other museums in Europe trying out the innovative model.

Lindberg says the main challenge for many of the institutions is the role of museum interpreter changing from explainer to listener, or even caregiver. For example, as our elder law attorneys know well, people with dementia sometimes become emotional and cry over seemingly insignificant things. Treating the sometimes fragile visitors with compassion and dignity is the museum’s main goal, and soon the House of Memories will be getting an upgrade to the 1960’s to provide even more people with this type of comfort.

At OC Elder Law, we know that deciding on senior housing and long term care options can be confusing and overwhelming. Our expert elder law attorneys are here to help you with personalized estate planning services and give you and your loved ones peace of mind. Contact us for a consultation today!